Nature is the form of God, we should understand the power, potential and wealth present in it but sometimes we do not give importance to these things and get surrounded by troubles. If we take care of nature, it will take care of us.” – stated Union Minister of Ayush Shri Sarbananda Sonowal on the occasion of 5th Naturopathy Day as he attended an event organized by International Naturopathy Organization (INO), Surya Foundation with the support of Ministry of Ayush in New Delhi. The video message of Lok Sabha speaker, Shri Om Birla was also played before the gathering.

The main event was organized at National Institute of Naturopathy in Pune. This year’s Naturopathy day was celebrated with the theme, Naturopathy: An Integrative Medicine, thus spreading the message of patient-oriented approach of treatment with Naturopathy across the country.

Ms. Kavita Garg, Joint Secretary, Ministry of Ayush emphasized on the importance of Naturopathy in today’s time. She advised to adhere to the principles of Naturopathy in daily life and said that efforts to pave way for Naturopathy Start-ups and Unicorns are to be undertaken by all stakeholders in a synergic manner.

On the occasion a special cover envelope was released to commemorate the 5th Naturopathy Day. Gandhi memento was given to the cycle rallies participants, which originated from New Delhi, Wardha and Hyderabad and converging at Pune. Certificates were given to the Startup Yoga Challenge winners. Students from more than 25 colleges participated in the event with faculties. The program concluded with Mallkhambh presentation. 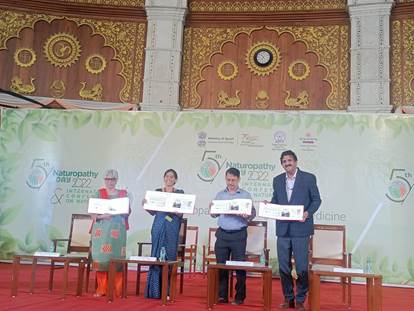 Naturopathy Day is observed every year since 2018 in India on 18th November, the day on which Mahatma Gandhi became a Life Member of the Nature Cure Foundation Trust and signed the deed. Gandhi ji is considered the founding figure of Naturopathy in India, as it was largely through his efforts that this practice became popular in India.