realme ranks among the Top 6 smartphone brands globally, according to Counterpoint

: realme, the world’s fastest growing smartphone brand, has become a Top 6 smartphone vendor in the global rankings, according to the latest market insights conducted by Counterpoint Research. realme took the sixth spot with 15 million shipments and 135.1 percent YoY growth in Q2 2021. As a notable industry disruptor, the upstart brand has made the mark in a time span of just three years.

Mr. MadhavSheth, Vice President, realme and Chief Executive Officer, realme India and Europe said, “realme was founded with a belief to provide young people with products with leap-forward performance and trendsetting design at a democratized price, and this is how realme was able to achieve all these milestones so fast. Supported by a young but strong team, we maintainrapid growth in core markets and expand fast in newly entered markets with a global mindset. realme entered one new category per month on average since 2020 and gradually built a realmeTechLife ecosystem. From a popular smartphone brand, we are now on the way to a great Tech brand”

“In the past three years, we are like a newborn calf making little of a tiger as well as a real go-getter”, said Founder and Chief Executive Officer Sky Li in his open letter, noting that the young team with an average age of under 29 has encountered a wide range of unknown difficulties but remained determined and passionate to bring extraordinary products to young trendsetters worldwide.

Having started from a nondescript brand, realme has surpassed all industry and customer expectations, expanding to over 61 markets worldwide and ranking as a Top 5 brand in over 18 of these markets, claiming the first place in Philippines and Bangladesh, third in Russia,fourth in India, and fifth in the Europe region in Q2 2021. Last month, realme became the fastest brand ever to ship 100 million smartphones, asdatashown from research firm Strategy Analytics 2021 Q2.realme also reached the landmark of hitting 100 million in cumulative shipments since its launch and also reached 50 million units in cumulative shipments in India in Q2 2021,  the fastest by any brand so far in India. realme captured the fourth position in the Indian smartphone market with a 14.6% market share.

Echoing the brand’s “Dare to Leap” spirit, realme has taken bold moves in its business strategy choices such as globalization from the start , keeping ears close to the ground and listening to consumer demands, and integrating advanced technologies in beautifully designed and user-friendly products. realme phones were the first in segment with a pop-up camera,  the first in Android with magnetic wireless charging tech, and one of the first with 64 MP camera. Those types of trendsetting innovations at those price points have appealed to a young and tech-savvy audience who quickly became passionate supporters of the brand.

realme is also prioritizing 5G products. realme’s 5G share in emerging market smartphone shipments went up from 8.8% in Q1 to 15.9% in Q2, ranking the 3rd  , according to the counterpoint market monitor service data Q2 2021 .realme led the Indian market in 5G smartphone shipments, capturing more than 22% share in Q2 2021, as per Counterpoint. 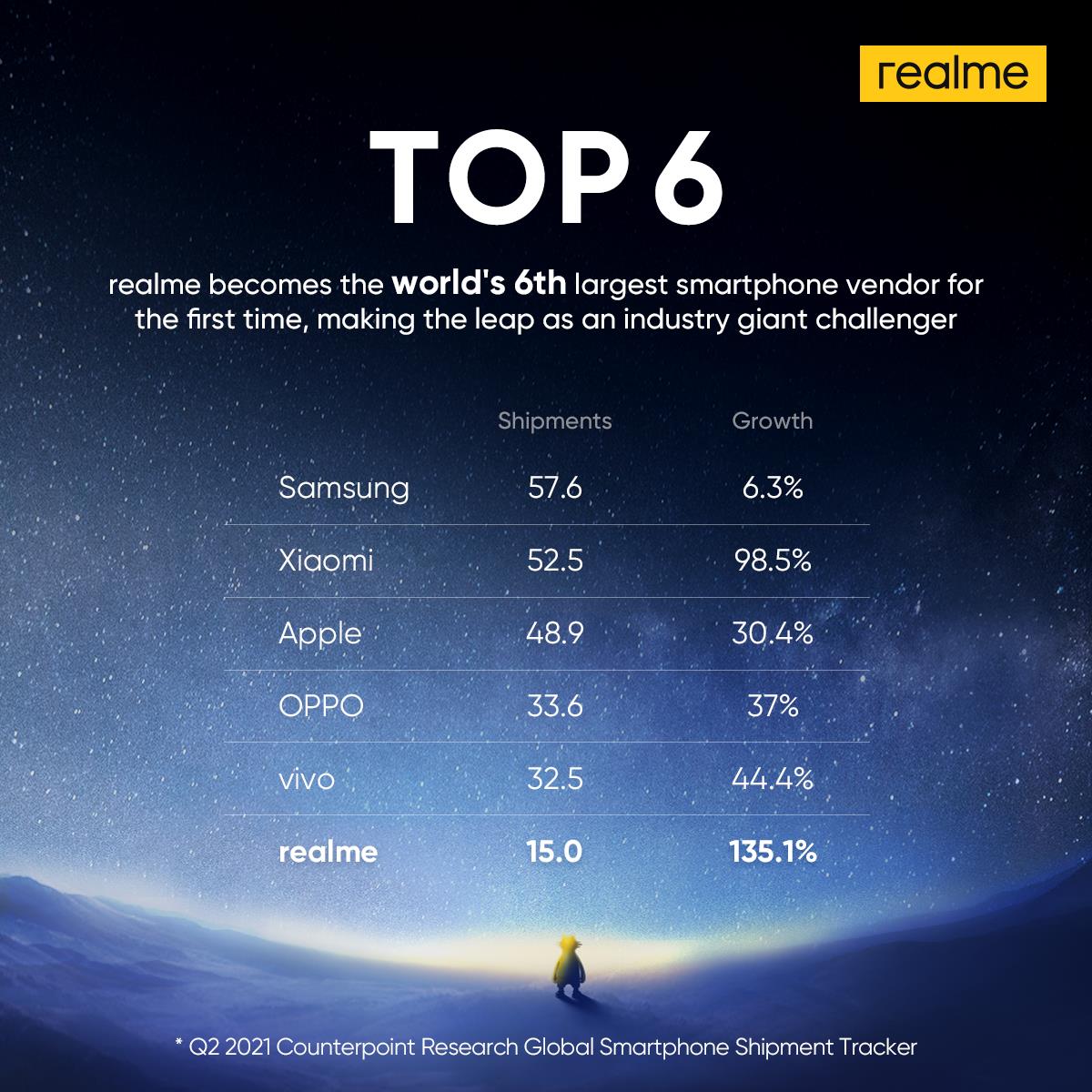 Mr. Sky Li,  Founder and Chief Executive Officer, realmesaid realme’s next goal is to achieve a dual-100 million target – shipping another 100 million handsets by the end of 2022 and completing the same milestone within the 2023 calendar year.

As for its product strategy, realme will streamline its multiple product lines and optimize its technological offerings. The GT series will become its only premium product line to explore cutting-edge technology and disrupt the high-end segment.