The Cricket Association for the Blind in India (CABI) today announced Indian legendary cricketer Yuvraj Singh as the brand ambassador for the 3rd T20 World Cup for the Blind to be held in India.

The participating countries for the 3rd T20 World Cup for the Blind are India, Nepal, Bangladesh, Australia, South Africa, Pakistan and Sri Lanka. The opening match will be played between defending champions India and Nepal on 6th December 2022 in Faridabad.

“I am thrilled to be a part of the 3rd T20 World Cup Cricket for the Blind as the Brand Ambassador. I commend and appreciate the spirit of visually Impaired Cricketers for their passion for Cricket and determination to fight everyday challenges. It is a different world, but it is a world of Cricket. Cricket has no boundaries. And I believe this game taught me How to Fight, how to Fall, how to Dust Myself off to get up again and Move Forward. So I urge and invite everyone to support this great initiative,” said Mr Yuvraj Singh.

The world cup is an initiative of the Samarthanam Trust for the disabled, which has been organizing this championship since 2012. Samarthanam perceives sports as a medium to improve inclusion and encourage persons with disabilities on various fronts. Since its inception, the trust has reached out to more than 25,000 visually impaired crickets.

Samarthanam’s sports wing, Cricket Association for the Blind in India (CABI), was established in 2010 to foster the cricketing dreams of visually impaired cricket players and to provide a platform to portray their unbound talent in the game of blind Cricket. CABI is affiliated with World Blind Cricket Ltd (WBC).

On having Yuvraj Singh as the brand ambassador on board for the ‘3rd T- 20 World Cup Cricket for the Blind, Dr Mahantesh G. K., President CABI and Founder Managing Trustee Samarthanam commented: “We are privileged to welcome Yuvraj Singh to Cricket for the Blind family. His personality shines through his unmatched energy and commitment to being bold, authentic, true, fighting spirit and uncompromising quality fit with CABI’s brand values.”

CABI’s committee selected the top 56 players who underwent coaching camp in Bangalore since July. Further assessment by the Selection committee led to the choice of the top 29 players who underwent rigorous Cricket Coaching and fitness assessment in Bhopal for 12 days. The selection committee has now chosen the final 17 Indian Squad for the 3rd T20 World Cup Cricket for the Blind. The World Cup will consist of a total of 24 matches to be played in several cities in India. 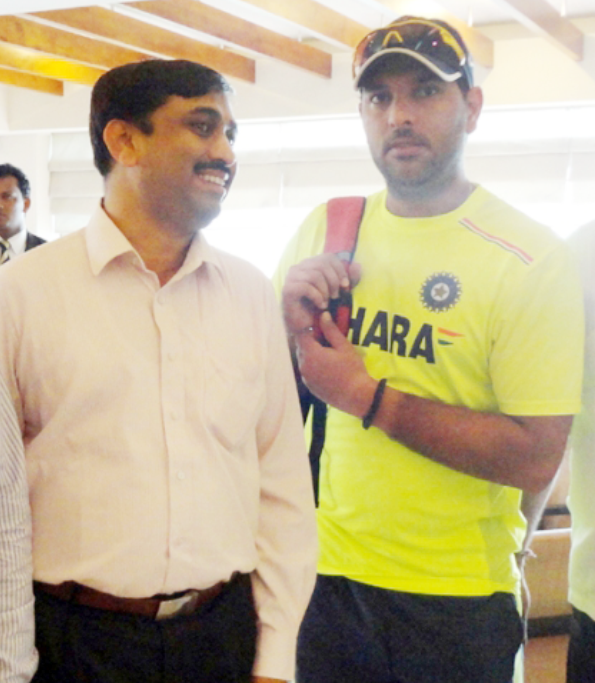 “Winning the World Cup in 2012 & 2017 was very special to us because it meant so much to so many. Our players who have been selected, have gone through rigorous schedules, discipline, hard work and I am sure the best 17 with the spirit of sportsmanship are geared up to win the World cup for the 3rd time” says Mr E John David who is the chairman of CABI Selection Committee and the General Secretary of Cricket Association for the Blind in India.