From onions to the ISL, Saviour Gama has slid his way to the top

FC Goa is a club that Saviour Gama is not only a player of but also a fan of. And now with a new three-year contract under his belt, the fleet-footed wingback will look truly take flight. However, the road to becoming a Gaur was never a smooth one as he recalled in his first interview with fcgoa.in since signing the new contract.

You speak of a sliding tackle and Gama’s face brightens up. He has come a long way, he has wisened up to many footballing facts. But for him, the sliding tackle has a special place in his heart.

“I have learnt a lot now, especially in the last three years. (Carlos) Peña always used to be in my ears. To not lunge in and the basics of football,” recalls Gama. “I wish I had someone to teach me all these things when I was young. 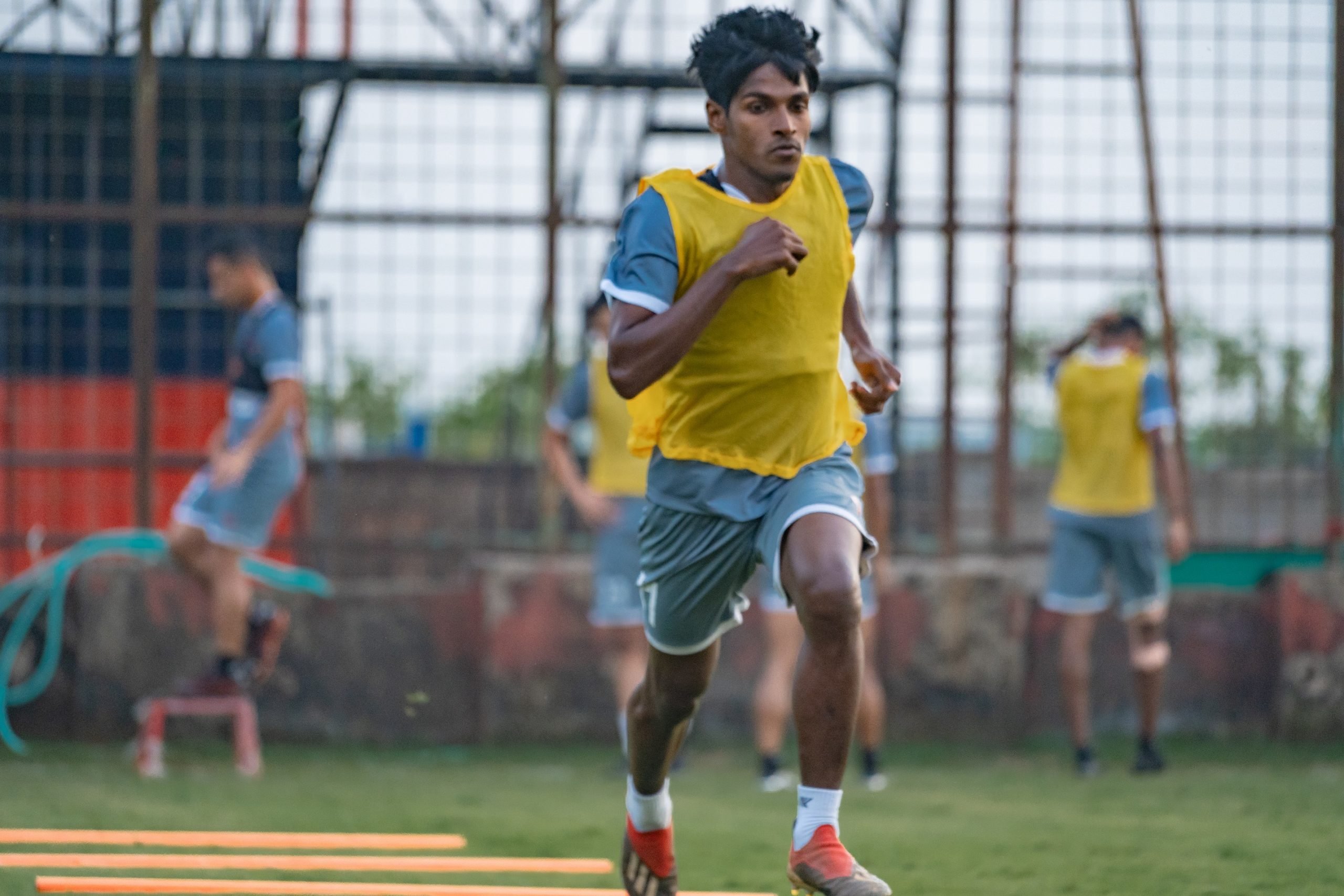 “It’s a very physical brand of football that we are used to. When you slide in wipe out everything – man, ball, everything – your opponent remembers. He knows that this is not going to be a walk in the park. That I am not afraid.”

Taking destiny into your own hands

“You ever have that feeling that you are meant for something big?” asks Gama. “But you are stuck. Living the lives that others told you that you deserve. I think everyone has those moments. Those are difficult times. Mine came in 2015.”

After graduating from high school, Saviour’s parents enrolled him on a Hotel Management institute, spending a near fortune on tuition fees. The youngster though had other ideas.

He was spotted by the famous Goan scout Joaquim Crasto, who suggested he go on a trial with Bardez FC where Armando Colaco had taken charge. Having impressed in the trials, Gama was called for practices.

However, it didn’t take a long time for the youngster to make up his mind.

“It was the first day of training in a hotel – a live environment. They placed me in the kitchen – which I thought initially would be fun. Then I was stationed at the cutting station and they handed me a whole vessel filled with onions,” recalls Gama with bemusement in his voice.

“I finished cutting one whole vessel. And then they placed another.

“I cut onions that day for 10 hours. And with each passing hour, I was just asking myself as to why I was even there. ‘Is this what I am going to do for the rest of my life?’

“I came back home and told my parents that I am not going back. I was verbally thrashed, I knew my father had spent a lot of money for my course, but I was not ready to give up on my dreams.”

Coming to the fore in the ISL

After a good season with Bardez, Gama would go on to SESA Football Academy, where he spent a season on loan – honing his skills before FC Goa signed him up in 2017. A part of the Gaurs’ Developmental team his first season, Gama’s performances caught the attention of all and sundry.

In 2018, he was registered for the Indian Super League.

“I think the offseason of 2018, I got a call that I was to travel to Spain for the preseason with the first team. That was the first time, I thought I saw a light at the end of the tunnel. The last three seasons I had played with a real drive knowing that I didn’t want to go back to that kitchen.

“I didn’t think I would feature much in the first team that season, but the coach put me in against Chennaiyin. It was the last game of the league stage.

“I was up against CK Vineeth, a very good player and a goal threat for the opposition. I was thinking, ‘this is going to be fun’. Somehow I didn’t feel nervous,” recalls Gama with a smile on his face.

“I knew it was a big moment and I was up against a really good opponent. And he was probably thinking that he going up against a kid. I needed to make a mark early on,” recalls the young left-back.

The 28th minute saw Chennai looking to give a quick response after falling behind to a Coro goal a few minutes earlier. Anirudh Thapa looked to turn as Chennai had the numbers (4 vs. 4). That is until Saviour Gama slid in, clearing the danger and wiping out his man.

“I slid in, cleared everything that was there. At that moment, I was really happy. I felt like I had made it”

The rest, as they say, is history. Gama, on his debut, helped the team to a win and a clean sheet. The most impressive part of the entire thing was how he handled the threat of CK Vineeth – a seasoned veteran in the opposing line-up.

On the night, Gama finished with 8 tackles, 5 interceptions and won 75% of his ground duels. On the other hand, the former Indian international was substituted after 76 minutes of running into a wall called Saviour Gama. He had finished his night after completing only 19 passes whilst losing possession on 16 occasions. Playing as a winger-cum-forward, he had more fouls to his name than he had been fouled.

Saviour Gama had made it.

VALVOLINETM LEADING THE CHARGE, PROTECTING THE POWER BEHIND EVS