As a major fire break-out in Deepak Nitrate’s Nandesari facility in Vadodara where five major chemical blasts caused the hospitalisation of seven workers after inhaling smoke, the matter of fire risks have once again come on to the fore. Major cities and towns are witnessing more frequent fire incidents. For instance, Mumbai alone witnessed more than 26,000 fire incidents in the past five years, of which about 324 fires were reported in the city’s high-rises alone, between the January 2020 and October 2021 period. There have been chronic fire accidents in the state of Gujarat in the recent past, as well. With rising fire risks in residential or commercial complexes or factories like Deepak Nitrate, the fire-borne casualties and loss of lives have become significant. Considering these anomalies, the fire experts have requested for setting up a sophisticated fire evacuation infrastructure in place to pre-empt fire accidents and the risks attached to them.

Dr. Vikram Mehta, Managing Director of Spartan Engineering Industries, who is fondly known as the Fire Evacuation Man of Maharashtra for his research and contributions in the fire evacuation field, said, “Time is of prime essence when fighting fires and evacuating people. Evacuation time is critical when a fire incident happens in high-rise buildings, as a small flame can turn into a blazing fire incident. We need a concrete and regulated framework to mitigate fire accidents by adopting a multidisciplinary approach to develop practical interventions to increase the use of fire evacuation lifts and other evacuation infrastructure. It will be a lifesaver for firefighters to save lives and assets. ”

Fire experts feel that it is necessary to have the right evacuation system for ensuring timely evacuation of people stranded amid fire, which can also help the fire brigade personnel ensure seamless rescue operations. Quoted an eminent fire expert, Dr. Deepak Monga,(H.C. Advocacy), “Fire Evacuation Lift is considered to be a new ‘Public Protection Equipment’ and vertical fire engine that reaches on time to evacuate people for saving their lives and assets, has been made mandatory in a city like Mumbai and rest of Maharashtra for high rise buildings and installed at every residential, commercial, and industrial establishment for firemen to reach to affected floors faster. The Brihanmumbai Municipal Corporation is effectively implementing its directive to install a special Fire Evacuation Lift in tall buildings 70 meters and above in height and over 22 floors. In a similar way, such regulations should be made effective across all municipal corporations in the states, including Gujarat, which will mitigate fire risks and offer a rescue measure in chronic fire situations.”

Dr Monga further stated, “Even in a city like Vadodara or Ahmedabad, there are unique challenges when encountering fire accidents, such as factors like evacuation time, distance, access to the fire department, fire control, and residents’ traffic management, and the need for alternate escape paths. To prevent such fire explosions in future, a customized fire evacuation lift could be an answer to the alternative escape path for a timely and safer evacuation system in the buildings.” 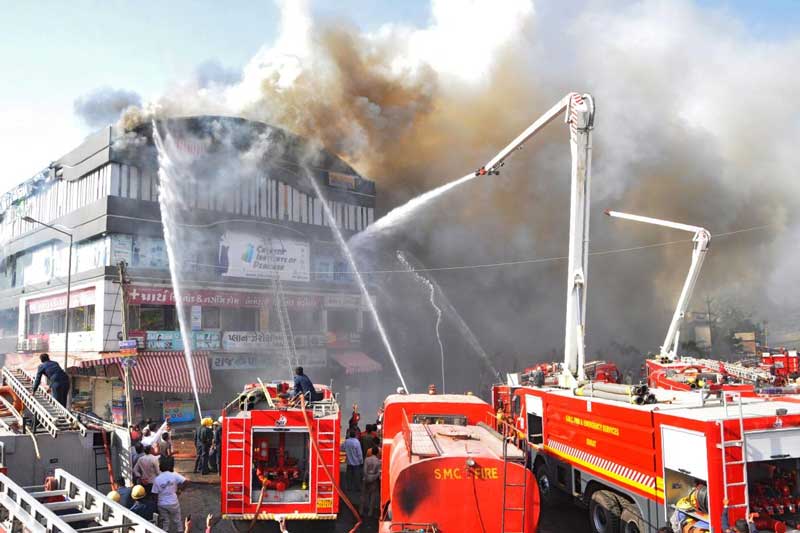 Dr. Mehta believes that a city like Vadodara should ensure the implementation of an advanced fire evacuation lift before we lose more human lives and that it should make an effort to plan safer infrastructure.