Citizen group writes to PM: Government must divest itself from ownership of Tobacco companies

Ahmedabad: Civil rights activist Ashutosh Dikshit today secured the support of members of the Citizens’ Alliance group, an advocacy platform he founded in 2013, to seek a ban on traditional tobacco-burn cigarettes.

In a follow up to his earlier letter to the PM -where he demanded a similar ordinance as was recently passed to ban E-Cigarettes, to ban tobacco burn cigarettes since they were proven to be cancer causing –Ashutosh Dikshit, writing as Founder of Citizens’ Alliance said that he was shocked to know that the government owned a tobacco company all the while it was making sanctimonious statements about smoking and its ills.

In an impassioned appeal, Dikshit said that it was downright cruel of the Government to participate in sale of tobacco through Government owned insurance companies, take insurance premiums for fear of death from consumers and profit from the sale of such tobacco as well. Calling itsacrilegious, Dikshit exhorted the PM to order the government to immediately divest itself from such holdings in tobacco companies. 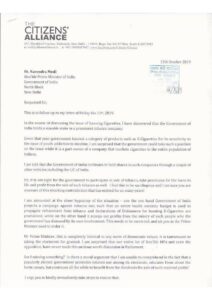 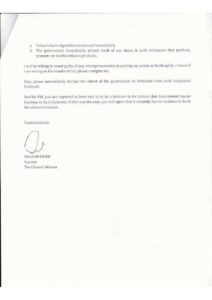 In his letter to the PM, Dikshit said, “Mr Prime Minister, this is completely inimical to any norm of democratic values; It is tantamount to taking your electorate for granted. I am surprised that our entire lot of Hon’ble MPs – erudite as they are – so quick to seize on most matters – or even the opposition, have never made this an issue worth discussion in Parliament”