Divya Chaudhry is a name that is imprinted in the Gujarati music and Entertainment Fraternity. She has sung over 200 Albums which is a landmark for any Folk Singer to achieve. Also, she has her name on 600 plus Gujarati Folk songs which have been dedicated to all the Gujarati song lovers around the Globe.

Divya was born in the Banaskatha district of Gujarat. At a very tender age, she had a clear path of becoming a singer and she started taking part in Annual Day functions to mold her carrier in Singing.  Divya through her song called ‘Chaudhry Ni Entry’ dived deep and came out becoming a popular singer of 2018.  Her recent song which became popular on YouTube is ‘Ray Dheladi’ which has got over a million views. 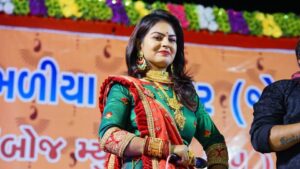 In 2018 with the support of Music Composer Ajay Vagheshwari, she released her song ‘Chaudhry Ni Ramzat’ which was produced by Studio Saraswati and it gave her the title of ‘Best song of the year’. Divya Chaudhry is known for Gujarati folklore, her Raas Garba singing in Gujarati and Hindi music Fraternity. She has thousands of fans following on Social media and thousands on YouTube. She gave her contribution in all Categories Like devotional Folk, wedding and Raas-Garba Songs.