‘The Big Picture’ to be hosted by superstar Ranveer Singh

A format based on the evolved language of the new ageIndia, ashow that beautifullycaptures the country’sbiggest dreams, a golden opportunity to win crores and a superstar host whois known to rule million hearts. It cannot get any bigger than this!COLORS, India’s leading Hindi General Entertainment Channel, known to be an industry pioneerin presenting pathbreaking content, is set to launch its first-ever visual-based quiz show, BYJU’S present, The Big Picture-EkAnokha Quiz Show. After entertaining his fans and admirers across the world and winning many accolades for his remarkable performances, Bollywood superstar and youth icon Ranveer Singhgears up tomake his television debut as the host of the show. Format owned by ITV Studios Global Entertainment B.V., The Big Picture will be aired in India in association with Banijay Asia and SKTV. Get ready to unlock your Taqdeer as The Big Picture premieres on October 16, 2021, at 8pm and air every Saturday – Sunday on COLORS andstream on Voot and Jio TV.

Talking about the show, Ranveer Singh said, “I have been eagerly waiting for ‘The Big Picture’ to commence as it brings to India its first-ever visual-based quiz show. And I am happy that it is finally here! We have been earnestly preparing for this show for a long time, and I can’t wait for the audience to play along and be a part of this unique proposition. The format of the show will allow me to closely interact with the audience which makes it even more special.  I truly believe that this exciting new journey will be packed with a multitude of emotions, and I am looking forward to it.”

Speaking about the show, Nina ElaviaJaipuria, Head of Hindi Mass Entertainment and Kids TV Network, Viacom18, said, “At COLORS we strive to raise the bar of entertainment for the audience with our variety of offerings. Whether it is introducing homegrown properties or adapting international formats, we push the envelope of innovation to give the best of fiction and non-fiction shows to our viewers. Staying true to our promise, we are proud to present India’s first ever visual-based quiz show – “The Big Picture”. Our audiences are ever-evolving, and consuming innovative audio-visual content has become an integral part of their lives. The Big Picture is a befitting proposition as it gives an opportunity to answer visual-based questions and win real big. We are delighted to have BYJU’s as our presenting sponsor on the show and look forward to a great partnership.  We are excited to kick off the festive season on a high note with the launch of two big properties – Bigg Boss and The Big Picture to keep the momentum going.”

After receiving recognition globally for its innovative and unique proposition, The Big Picture gears up to create waves in India. A next-generation quiz show based on knowledge and visual memory, allows the contestants to answer 12 visual based questions and stand a chance to win the jackpot of 5 crores. Once the picture appears on the screen, the contestants will get multiple-choice options to give the correct answer. They will get 60 seconds to hit the buzzer and commit to an answer and for every correct response, they will get an opportunity to win big. The key element of the show is‘IndiaWaale’and and ‘GharWaale’ lifeline that the players can opt for. Through the ‘India Waale’ lifeline, the viewers can participate from the comforts of their home in real-time by logging on to the Voot Select app and win a substantial share of the player’s prize money. When any player opts for the ‘India Waale’ lifeline, the first individual out of the ‘India Waale’ panel to answer correctly will be chosen to partner with the player and win a 25% percentage of the winning amount. For ‘Ghar Waale’ lifeline, the contestant can seek help from their family and friends to give the correct answer. Additionally, the viewers can also  participate and win money with the Weekend and Weekday play-along on Voot app. In every episode, Ranveer Singh will ask a question and users will have to submit their answers on Voot app. Lucky winners shall stand a chance to win money.  For Daily play-along, a new question will appear on the Voot app daily giving the audience a chance to win money throughout the week as well.

Speaking about the show Manisha Sharma, Chief Content Officer, Hindi Mass Entertainment, Viacom18, said, “As individuals, our visual memory is one of our biggest strengths and pictures are considered as the most impactful medium of communication. People today consume and reciprocate well to any visual-based content and the concept of The Big Picture is based on this insight. It is a new-age, contemporary, and never seen format that will give the audience, playing from the studio and from the comforts of their home, an opportunity to answer questions based on pictures and walk away with the prize money. To take the show to the next level, we have the biggest superstar of the nation, the talented and powerhouse of energy Ranveer Singh, as the host.  With this highly engaging format, we hope that the viewers not only watch the show but also participate and make it a huge success.”

Deepak Dhar, CEO, Banijay Asia said, “Our collaboration with COLORS for the internationally acclaimed title ‘The Big Picture’ brings forward an intriguing format moulded as per the Indian mindset and milieu. At Banijay Asia, our constant aim is to introduce formats and narratives that are fresh, engaging and entertaining. It is with great anticipation that we launch ‘The Big Picture’, adding yet another enthralling show to our library.” 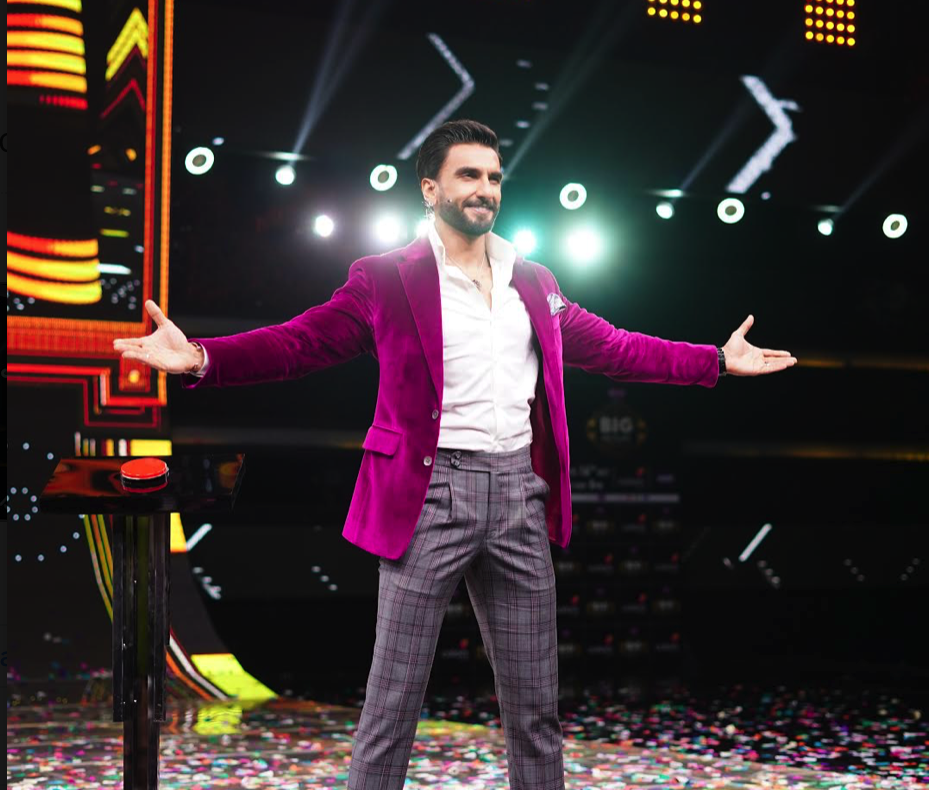 NadimKoreishi, CEO,SKTV said, “We are creating a great experience for the audience who is now exposed to all kinds of entertainment. Introducing new formats is our way of approaching growth at SKTV. The Big Pictures adds a fresh layer of excitement to screens and with the electrifying presence of Ranveer Singh, we’re very excited for this launch”

Atit Mehta, Marketing Head, BYJU’S said, “The Big Picture is a one-of-a-kind game show that tests contestants’ knowledge and visual memory. The show is all set to nurture millions of dreams across the country and as brand partners, we hope to celebrate the spirit of Indians and also inspire a love for learning.”

Ayesha Surty, SVP licensing at Global Entertainment, ITV Studios said, “Big congratulations to the team at Viacom 18 and COLORS TV on bringing this compelling format to life, in the form of The Big Picture India, hosted by the enigmatic Ranveer Singh. Audiences are going to love this fast paced, highly engaging show that promises to bring the excitement back to televisions screens everywhere.”

COLORS has devised a 360-degree multiscreen, multicity, high investment campaign spreading across the length and breadth of the country to build visibility and awareness of the show. Various marketing and digital mediums have been tapped innovatively to do the same. A high-frequency promo campaign will run across network and non-network channels, Local Cable channels and major DTH service operators. High impactful ads are being planned in key HSM publications along with an extensive Out-of-Home campaign on Billboards, Bus Shelter, Radio Cabs, Railway and metro stations, auto rikshaws and tempos. On the digital front, innovative campaigns like The Big Picture Ki Paathshala and #TaqdeerKiTareekh will be carried out on the OTT platforms, social media, Voot and Jio TV. In the launch week, the audience will also get a personalized invite to watch the show from Ranveer Singh using AI technology. As a part of the influencer outreach, COLORS has roped in notable social media personalities and artists to bring alive the concept of The Big Picture by posing against popular monuments and iconic locations across various cities. With this extensive and innovative campaign, the channel aims to optimize impact and reach.

‘COLORS’ is Viacom18’s flagship brand in the entertainment space in India. A combination of ‘emotions’ and ‘variety’, COLORS, launched on 21st July 2008, offers an entire spectrum of emotions to its viewers. From Fiction Shows to Format shows to Reality shows to Blockbuster Movies – the basket contains all ‘JazbaatKe Rang’. ‘COLORS’ is dedicated to promoting ‘Cohesive viewing’, through shows like ChotiSarrdaarni, Shakti…AstitvaKeEhsaasKii, Udaariyaan, Barrister Babu, BalikaVadhu, NimaDenzongpa, Thoda Sa Baadal, Thoda Sa Paani, Molkki, Bigg Boss, Dance Deewane, Bigg Boss and KhatronKeKhiladi amongst others.

Viacom18 Media Pvt. Ltd. is one of India’s fastest growing entertainment networks and a house of iconic brands that offers multi-platform, multi-generational and multicultural brand experiences. A joint venture of Network18, which owns 51%, and ViacomCBS, with a 49% stake, Viacom18 defines entertainment in India by touching the lives of people through its properties on air, online, on ground, in shop and through cinema.

SK TV is a production house spearheaded by Salman Khan. With a vision to create scripted and non-scripted shows across genres for Television & Digital. Major presentation by SK TV include among others The Kapil Sharma Show, Nach Baliye in association with Banijay Asia.

ITV Studios is a creator, producer and distributor of world-leading programmes that people can’t get enough of. We connect millions of people every day and shape and reflect the world they live in, we are More Than TV. ITV Studios is home to some of the best creative minds, crafting over 8,400 hours of original programming across 60 production labels. Our global footprint spans 13 countries including the UK, US, Australia, France, Germany, The Nordics, Italy and the Netherlands and our global distribution business sells our catalogue of 46,000+ hours to broadcasters and platforms around the world. ITV Studios is part of ITV PLC, which includes the UK’s largest commercial broadcaster.