This song depicts the beauty of love which can happen anytime, anywhere and with anyone! Here a rich and handsome boy falls for a simple girl who used to teach underprivileged kids.

In the month of love, Griebs Music Private Limited of Mr ChakirHussain has brought a musical love story called ‘Bepata’. The song has been sung by Abhijit Vaghani, who is also playing the main lead, with Donal Bist. This song is composed by Anajana Ankur Singh and written by Arafat Mehmood.

The producer of Bepata, ChakirHussain, described it, as a tale of eternal love. About the song, Hussain says “This song depicts the beauty of love which can happen anytime, anywhere and with anyone! Here a rich and handsome boy falls for a simple girl who used to teach underprivileged kids.” 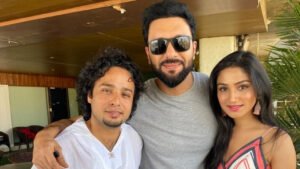 He further added “This would be the first solo of Abhijit as a singer and actor, but he played the character of a selfless lover very well. On the other hand, Donal completely justified the role of a simple next-door girl, who is working for the betterment of poor children.”

So, how they meet? In the answer to this question, Mr ChakirHussainsaid “When you saw a beautiful girl from outside as well as inside then it becomes impossible for anyone to resist. And same is the case with our hero, who experienced love at first sight! When he saw a pretty girl with a pure heart, teaching kids on the streets, his heartbeats increased by a thousand times. Then the story continues as both of them have similar feelings, for each other. But destiny has its own plans!”

Now, what next? Smiling gently, Mr ChakirHussain said “Unfortunately, the girl died, and the boy became completely restless, he is just wondering on streets to find the reason for his survival. He keeps on visiting those places again and again where they spend time together. In short, he is in complete depression after losing the girl whom he loved unconditionally. Now life has become worthless for him! As in the song “TereBina main bee ptaaa” then suddenly a small girl holds his hand with a beautiful smile and in the response, he also smiles back, after several months.”

Please tell me, what is the end of this heart touching love story- Did she came back? Who was that small girl? Then he said- “Well, to get answers to all these questions, you have to watch the video of ‘Bepata’ which was released yesterday on 20 February 2020.